image - Facebook post about nationalist Easter cakes in Russia and Ukraine.
[I have been corresponding via Messenger & following on FB a couple people in Kviv, Ukraine. Via a repost on one of their pages, I saw these Easter cakes. One set of cakes celebrate the Azov batallion, the other the Z army. One nationalism vs another, Ukraine vs Russia. On Easter. Still trying to let all that sink in. But even the folks in Russian & Ukraine posting in reply found humor. The original post said we cannot be brothers, but several in reply said, "Because we are sisters."] 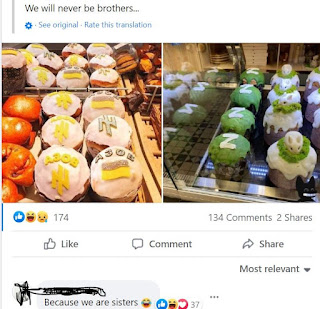 I am in an email back-and-forth with an old friend, who was a mentor when I was younger. In debating the war, I said something about how offensive it is that the Ukrainian government symbol is an Iron Cross. He said it is not an Iron Cross. I don't have permission to show what he said, but here is my reply to his reply.

“Do you think when Jesus comes back, he's really going to want to look at a cross?” - Bill Hicks

Christians, out of anyone, ought to understand what an utterly offensive and problematic symbol the cross is. Some sophisticated theologians grapple with this, sometimes it is called the scandal of the cross.

If we are to believe any of the legends, the early Christians were an anti-imperial decolonized bunch of mystic misfits. If we are to believe the stories, emperor Constantine corrupted the ragtag religion and marched behind the cross. Constantine believed that God intervened in a military battle to help make him a victor. The cross as a popular Christian symbol is post-Constantine.

The militaristic or nationalistic use of the cross doesn’t have to be overtly Nazi to be disgusting. See to people who actually love Jesus, not the many many counterfeits (maybe my version is the real counterfeit, who knows) don’t celebrate the cross. If we wear it, it is a solemn subversive dissociative reminder of the imperial tragedy that is central to our religious story.

My radical lineage in the church is inherently pacifist, in some ways also anarchist. From a mystic anarchist perspective, participation in the Beloved Community or “kindom” of God, this membership prohibits allegiance to any flag or participation in any army.

Our pal Nietzche hated Christians for what he perceived as their/our drugged self-hatred. He compared Christ to the narcotic of drink/alcohol. He went further:

“Christianity has taken the part of all the weak, the low, the botched . . .it has corrupted even the faculties of those natures that are intellectually most vigorous, by representing the highest intellectual values as sinful, as misleading, as full of temptation.”

By contrast, theologian John Caputo embraces what he calls weak theology, the anarchic weakness, the utterly powerless non-coercive power of the cross. Thinking with Caputo, we will take the botched and corrupted weakness heaped on us by the Nietzches of the world, then lean into it. This is why the people I admire in my tradition (Catholic workers and the like) are always hanging around the incarcerated killers, homeless drunks, unsavory hooligans all.

Last weekend was orthodox Easter, now despite the Pope and me calling for a truce, the war rages on. But that did not stop Ukrianians from having Azov Easter cakes or the Russians from having Z easter cakes. One nationalism against another.

Posted by Teacher Preacher at 8:32 AM