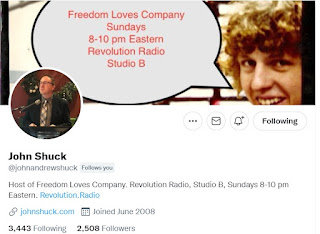 My friend John Shuck died of Covid last year. He was also an outspoken Covid skeptic and anti-mandate anti-mask anti-vaxer. For some folks, that is all you need to know to stop reading now. But for others, perhaps you might join me in this reflective rant and strangely hopeful lament. As much as I want to make a loving tribute to John, his death has occasioned some hard reflections within myself.

To begin, John and I were not close by any means, but our paths crossed enough and amicably, that I call him friend. On many topics, I initially viewed him as a fellow traveler and kindred soul. When we met, he was a leftist atheist Presbyterian pastor from east Tennessee, who hosted a progressive podcast/talk radio show. Although I never identified as an atheist, I was always intrigued and impressed with atheist Christians, especially in my former PCUSA tradition, where we had a strong commitment to intellectual acuity, inclusion, and social justice.

It was a shared social justice commitment that brought John and I into each other’s orbits, through a small advocacy group called Presbyterian Voices for Justice (PV4J), where I served briefly as our national co-coordinator/chair. Soon after we met, he left a board position with PV4J and moved from east Tennessee to Portland. The west coast seemed like a good fit for him, but I continued to follow him on social media. I don’t have a specific moment when things shifted for him, but I know that he juggled personal and professional concerns with his political presence on social media.

Once on his radio show, he hosted the authors of The Martyrdom of Thomas Merton: An Investigation, a book that proposed that the “accidental” death of Thomas Merton in 1968 may have been a murder. I found the interview so compelling, that I mentioned this theory in an essay I wrote about MLK and Merton for my fanzine Ordinary Space. One friend, after reading my piece, dismissed the Merton book out-of-hand and warned me to stay away from the conspiracy crowd.

As anyone who is following the arc of America knows, conspiracy theories have spawned more conspiracy theories into a spiral of crazy over the last several years. As our communities have dug themselves into warring culture-war camps, everything gets weaponized. For John Shuck, his passionate interest in the “9-11 truth movement,” for example, probably meant he was poised to get going as a covid skeptic. We are far from a reckoning with what these fractures and their attendant rabbit holes really mean for the long term political reality and consequential emotional tragedy for our families and friends.

Writing about this today requires me to make some confessions. I am at once a hopeless idealist optimist and a contrarian anti-authoritarian leftist. While I do not consider myself a conspiracist, I confess that I have dabbled in conspiracy theories. I do question the “dominant narrative” about certain topics, especially the extrajudicial assassinations of people like MLK or Malcolm X. In that light, I was immediately interested in the claims in the Merton book.

Now, Covid was a turning point for me, when I realized without regret that for the first long while, I would mask in public, abide by social distancing by seeking a remote work arrangement, and get the vaccine without fear. But that was the first time in my life that I was quick to join the mainstream medical consensus about anything. To be clear, I am not a doctor or an ideological herbalist or naturalist.

But I  have an anxiety about doctors and medicines and come from a hippy health food culture where I taught myself to chew raw garlic, eat spoonfuls of local honey, drink lots of water, and sip herbal tea for most common ailments. The covid vaccine seemed like a no-brainer for me for public health reasons, but I guess you could say, I had previously traveled in circles that were anti-vax adjacent.

All this is to say that I should not jump to judgmental conclusions about friends in the “bodily autonomy” crowd when it comes to the Covid vaccine, including and especially in my social media relationship to John Shuck. Because I am already a hypocrite about too many things, and folks like this are probably going to recoil from kneejerk condemnations, maybe instead, maybe folks need prayers and compassion and persuasion from people like me who were previously skeptics, but chose to get the jab.

Yet sometime in the last year (or so) before his passing, when I stumbled across John’s comments about Covid, I made a Facebook post “warning” folks about his passion against the mandates and masks etc. To be clear, I was pretty dismissive. He was clearly a rightwing wacko of the QAnon school, that is what I was thinking. The purpose of my post was not to call-out John per se, as much as to imply that my friends should block or unfollow him. Such are the emotions on social media and the boundaries we surround ourselves with, in the worlds of Trump and Biden and Qanon and covid.

To illustrate how extreme John Shuck had turned, he had once posted in support of Mt. Juliet hate-preacher Greg Locke, in strange solidarity I suppose, because of how anti-mask Locke was. Strange bedfellows from an atheist antiwar leftist like Shuck, who knows like I do, how hard it is to be on the social justice left in rural Tennessee, but okay.

Even though John died back in October 2021, I only learned about his death this week.  This week, I also have been called by otherwise progressive fellow-travelers a Putin-sympathizing Russian-bot because I oppose spending billions of our dollars and weapons in a blank check of unlimited lethal military aid to Ukraine, in our USA proxy war against Russia, a war that if escalated too far, could result in a full-scale nuclear war. I suspect that if John were still alive, he and I would agree about the human horrors of this useless, suspicious, unnecessary war.

I could pontificate all day, about all the reasons why some of my neighbors have found what they perceive as solidarity and safe harbor in white Chrisitan nationalism. That somehow this camp also includes conspiracy theories, covid skepticism, and ideas about the “deep state” makes them an odd mix to me. But today, that they perceive of themselves as rebels and the Democrats as “the man” seems like a plausible theory. It is a new strange upside down world where liberals are conservative, and conservatives are radicals. But I will pause that analysis to say something else, which for me makes the main point of this rant and lament.

As much as I am almost always in one and not the other ideological camp, neither my membership in that camp, nor the ideology itself, should be used to demonize or dehumanize the others. It shouldn’t take the death of an anti-vaxer conspiracist that I considered a friend for me to realize and remember that. But here we are.

No matter how many times we cleanse or question our own motives, authoritarianism can creep in from the left or right. Authoritarianism is toxic and anti-compassion and destructive of voluntary cooperation and mutual aid. Anti-authoritarians who also espouse a Jesus-infused law of love don’t need to become cops in their heads or cops on social media or cops or bullies of any kind.

I was quick to judge John Shuck, as much as some of my fellow lefty Christians were, those of us who knew him before he became conspiracy-obsessed, I am sure. While I don’t condone the shrill outspoken anti-vax crowd around Covid for obvious health reasons, I have to humbly admit that this topic’s weaponization on “both sides” speaks to a deeper fracture in our souls and in our communities. If any of this or this last bit prompts some of my folks to shame or blame me for being soft on conspiracy or anti-vaxers, I can take it.

As much as I am an abolitionist, feminist, an accomplice to trans and queer friends, an avowed anti-racist, I am also a failure at being a good member of the “liberal” or “progressive” crowd, especially as it partitions itself these days on social media.

I fear that online trolling and harassment around political minutiae or an aggressive cancel culture are just soft, slippery, and sleazy forms of the carceral mentality that ultimately otherizes every possible “other,” that same mentality at its conclusive terminus places humans in cages, and justifies state sanctioned murder with wars or the death penalty.

[For more about what informs me about these topics, I cannot recommend enough the work of Clementine Morrigan, their fanzines and Instagram feeds, and their podcast F*#(#*g Cancelled.]

As much as I speak out against anti-blackness and white-supremacy, I also see how banning members of the so-called “far right” from social media or boycotts of people like Joe Rogan are such serious “red herrings” from the authentic struggles to support low wage workers, unionize places like Amazon and Starbucks, to achieve universal healthcare and housing and income, to abolish rent and debt and wars and prisons and police and destroy predatory capitalism forever.

While I might agree with the underlying reasons for countless cancellations and free speech restrictions, they too often come from an emotionally wounded place that fails to rationally consider what history teaches us about how harmful the state and the secret police have always been to all forms of dissent. That is, while I might gleefully or tacitly approve of consequences for people on the far right, it is much more true that these malign and mendacious marginalizations have targeted, imprisoned, cancelled, and even murdered people on the left.

I have another million reasons to tell you why I don’t care if you sing bad Jesus music on airplanes (to pluck a culture-war non-crisis of this week) or if you hate people that sing bad Jesus music on airplanes. I do care that we all have our basic needs met and foster difficult conversations with friends across the chasms of culture wars. In this season of Easter, in this time of fragile hope and desperation, I recommit myself to be slower to judge others or myself, especially their motives or sincerity and to seek peace and human solidarity that transcends the fractures and ideological divides in our world.

Just writing these words has made me want to call some friends, long-term friends that I have in my own community that I have stopped talking to because of “politics.” Trying to reconcile those friendships may be frustrating or impossible, but the tug of love and compassion in my heart are real. If I want everyone to be less dogmatic and hateful today about Russians, for example, I need to be less dogmatic and hateful about, gulp-ugh-spit, Republicans.

Somehow I know that everything I have said here will be seen as too simplistic or too something: naive, idealistic, enabling, soft on my enemies. But somehow, also, I feel a deeper rumble, way deep down, that says I too have been too judgy, too toxic, too harsh, too ideological about too many things and that abiding human empathy, agape love, compassion, mutual aid, and solidarity, these values transcend it all.

In one of his last blogs before his death, John Shuck wrote this: “These are dangerous times. They do not have to be fearful times. Fears will come up. They will arise. Our old foe, fear, will attack us and want to drive us. Love, Courage, and Joy are stronger than fear, when we give them control and let them drive our beliefs and actions.

Posted by Teacher Preacher at 7:39 AM