walking away: a rambling blog as part of my formal departure from organized christianity 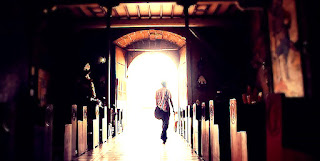 between 1979 & 1981, bob dylan released three seminal religious records: in retrospect, this is known as his “born-again period” or “christian phase” or what have you. i don’t know that he ever really renounced all that, he just moved on. “gotta serve somebody” still makes it into a setlist, of this i am sure. today i am accepting that the 11 years of my dylanesque christian phase have ended.

while i am still very much interested in jesus & theology, i am no longer actively involved in an established christian community, outside a tiny, online microchurch that we convened in-person as a supper church, some 11 years ago in my college town, whose handful of continuing core members are now geographically dispersed around tennessee & far across the land.

i walked away from church before. I was 20 years old & left to pursue the trinity of sex, drugs, & rock n roll, also aligned with an eclectic earthy neopaganism. when i crawled back to church in 2009, i was newly sober from alcoholism, still struggling with other generalized addictions, with a whopper of a testimony. dylan’s passion & abandon on “slow train coming” came to me like so much miraculous morning manna.

i walked away from church before. that time seemed strangely simple, this time it’s been hard. but after 15 months of flip-flopping & floundering in my heart & head, i have finally admitted that it’s over, & the emotional floodgates have opened. online “exvangelical” is such a hot hashtag, but “alienated mainliner” just doesn’t seem to have the same Twitter gravitas.

so after 12 years of being deeply invested & engaged in the life & work of a mainline christian church, i am walking away again, feeling acutely unchurched & unchurchable, but still very interested in the wisdom traditions at the margins & in the wilderness, the counterculture of new religious movements & more. that is, i am not an atheist, never have been to my knowledge, still identify as a mystic hippy theologian. maybe i am post-christian or christian-adjacent or christopagan as i thought i was for some time.

yet i feel a need not to organize or systemize in doctrine that which is the defiant disorganized organic journey of an ADHD dopamine fiend. i stand at the precipice of theological incoherence which is a strange place for an academically-trained theologian. truly my theological perspectives are food for my spiritual sustenance. what do we believe, why do we believe it. i won’t be writing any treatises after bonhoeffer & barth, not after rob bell, either, but i am still interested in paul tillich & peter rollins.

i am not a polytheist or an atheist, but i am also not not those things. not agnostic or undecided either, an accumulated body of religious experience brimming with the mystical & ecstatic, the angry & desperate, maybe this is what whitman meant by containing multitudes.

a couple years ago, i remember this jarring  conversation with a colleague who happens to also be a christian. this was a season ago when my Jesus-card was still laminated & around my neck like a lanyard at a rock festival. but i don’t remember the particulars of the topic, just that i shared a certain common colloquial phrase, that served as a kind of affirmation. you know the phrase, have perhaps used the phrase in a similar manner from time-to-time. & the response i received startled me.

i was being accused of superstition for using that phrase. paganism maybe. nature worship who knows. but that phrase ripped at me because it spoke to a thing, an object if you will, on the material plane. but god is not in the thing, don’t say that, the person said. this startled me because i am thinking about it however many years later. the christian supremacy stretch. your religion is superstition, mine is reality. disembodied toxic theology. of course i was strongly identifying as christian then, a pastor even, a religious professional.

i walked away from that encounter, pondering what i perceived as a scolding.

the phrase -- i am sure you are wondering what it was. well, it was “knock on wood.”

google tells me: “one common explanation traces the phenomenon to ancient pagan cultures such as the celts, who believed that spirits and gods resided in trees.” see my religion or anti-religion or whatever-the-heck my animist life-loving freak-on is, this knows that the trees are alive. the trees. are alive. churches hung-up on superstition-shaming, i am not so sure about.

to be clear, i have nothing against superstition or magic or believing in the tooth fairy or santa claus or the hindu pantheon or isis or dionysus or mama mary in a pastry or angels on the clouds. what upsets me now is the impossibility of genuine interspiritual interfaith anything when one religion excludes itself from the truly ineffable mystical weird whatever--but calls down fire on its enemies in all kinds of hyper-violent hocus pocus as seen among white right-wing evangelicals today. when so much of evangelicalism today looks like its own form of curses & spells, it seems disingenuous at best for christians to go calling out others for animism among the trees.

jesus as i knew him was such an enchanted evader of authority, such a shambling sorcerer & disreputable lowlife that i think he would just walk into most of these churches today to shoplift supplies, use the wrong gender restroom, & chug the grape juice wishing it was wine again.

does anyone care that i spent easter sunrise service dancing & shouting amen & taking pictures of the flower cross with my cellphone camera & generally just having a good time, ambling about the outdoor worship space. that would not be a thing except my friend the preacher “got calls” from concerned parishioners about how my behavior was disrupting the service.

someone even suggested to my face before leaving that i needed a good apostolic church. too bad we don’t having any queer-inclusive deadhead-friendly pentecostal congregations around here. bec cranford is in georgia & i am in tennessee. so my next dead show will be more church than that was. this is a problem for churches everywhere. it is not a problem for deadheads as long as bobby is still alive.

“the ones who walk from omelas” by ursula k leguin is a mindblowing short story from 1973. the first time that i read it, i was tricked, treated, swept away by the images of utopia, like i still sometimes get swept away at the big music festivals today, like I was intoxicated at the smaller festivals back when. the narrator’s devious hook was working on me.

but the narrator pranked me in the philosophical & prophetic way that le guin does. the entire premise of the story is that the bliss of the privilege hangs on a moral contract to perpetuate sadistic torture, the price of salvation for you is damnation for somebody else. willful torture of the one for the privilege of the many.

the damned child permanently punished for every other glorious glory is jesus, is child labor, is the haitian, is the afghan. for we live in that world without end, not amen, but goddamn. we don’t walk away. we make endless excuses for staying in our mini mansions. perhaps it’s impossible to walkaway we think. some have tried, but such abandonment & rejection come at a great cost.

the doctrine of total depravity & original sin that lurk behind everything in my tradition have been etched into extremes. anthropologies of radical love &  grace alternatively flatten into placid pious platitudes that don’t put food on the plates of the suffering. guilt-&-shame-fueled fixes from left & right are only fostering more guilt & shame, fixing nothing. total depravity keeps fulfilling itself which was the wisdom behind the chesterton quip that “original sin” was the only doctrine that we could prove.

strangely, one of the things I will miss about the formal christian paradigm is the arc of the sin-redemption narrative, even original sin.

as a formerly hopeless drunk, recovering alcoholic, there is something strangely comforting with beginning at: you are a total loser, turd on the bottom of the boot, POS blankety-blank. Because selfish addicts who have had a bottom, have known suffering & loneliness, are not overly naive or idealistic about their inner god/goddess saints angels etc.

more sadly, the institutional evil proliferating from far-right theocratic churches today -- you know, the whole America is chosen & perfect, anti-mask anti-CRT crowd -- these folks especially could benefit from apologizing for inherited collective sin. it seems their own tradition doesn't apply to themselves.

since i am in recovery, the 12 steps offer me a structured rubric for confession & reparations, so i have that to lean on in lieu of the formal collective prayers of confession, that are one of the best parts of our liturgy.

whatever the great mystery might be, it can’t be a mere projection of our worst qualities onto a divine daddy figure, where the toxic & abusive suddenly become somehow majestic mentoring. “god is in control” is not shown by the evidence. a model of the divine micromanager in reality looks like a monstrous evil, not the radical compassion seen in the examples of buddha or christ. the hard lessons of deconversion & deconstruction include accepting the facts that even the most liberal or liberating traditions within the abrahamic stream bring with them inherently harmful ideas, practices, & structures.

while i have learned so much from the “exvangelical” movement about religious trauma & abuse, i do not think that the mainline progressive churches are in any way immune from spreading toxic theology or propagating religious harm. but “alienated mainline presbyterian” just doesn’t have the twitter gravitas that “exvangelical” does!

from chasing a religion that is all love & beauty & light to chasing all the other unattainable utopian ideals to accepting the sometimes gorgeous often grotesque unusually messy realities that are always already imperfect, like so much moist fuzzy moss overtaking what once was a deck.

everywhere we drive the backroads whether rural or urban we see the decadent decrepit decay of our empire in decline, but we keep building it back up, awaiting the floods of change, as the tidal wave takes down another fortress of ego-fed certainty. the whole world is at the first-step, to say it in a 12-step recovery way. & we are powerless over our addictions to this way of life that cannot last. & we are powerless over everything that is yet to come.

so i am walking away. learning about religious trauma & adverse religious experiences. forgiving the church, even the parts that damaged me, because i still like that forgiveness thing. accepting acceptance, letting go & letting go again.

Posted by Teacher Preacher at 3:34 AM 3 comments: