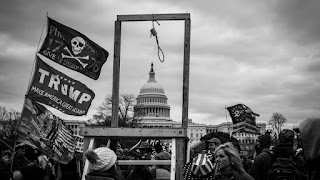 Did the Biden-Harris election redeem America?

The palpable existential relief that millions felt at the formal end of the Trump regime was some kind of a spiritual sacred soothing event. But did that simply save America from itself? Probably not. This better world is not yet, and this change is not quite, not really redemption.

Certainly the recent elections of progressive black representatives like Cori Bush and Jamaal Bowman or that victory by Reverend Senator and Ebenezer pastor Raphael Warnock, are all very hopeful signs, but this important shift is a topic for another time. Even if many of us feel we can breathe again, we cannot go back to sleep.

The shocking theologies and ideologies of Trumpism have transformed everything we may have once wanted to believe about some Lincolnian better angels. Trumpism and white nationalism shocked us again into realizing that particular demons have been with America since the beginning.

Speaking as someone whose personal faith is furiously frustrated by the fierce chokehold that Trumpism and white supremacy have on the American church, as someone who enthusiastically supported the Biden-Harris ticket, even if my politics are far to their left, and as someone profoundly relieved by the results of the general election, I believe it is definitely a devious and tempting narrative to view the attempted insurrection of January 6th as a purely privileged spasm, as an anti-American, anti-Christian aberration. January 6th was real, and it was painfully perfectly obviously all-American.

If the profuse profundity of patriotic and religious symbols are to be seen and not unseen, this was a deeply religious revolt and profoundly patriotic riot, another 1776 just as the proponents declared. Set aside your romantic revisions about the Revolutionary War for this essay. We are better off if not deceived by the always heroic, always redemptive narratives about America, that are such sweet coping mechanisms, compared to the aggressive abyss of sadness and shame included in the actual origin stories of the national project.

While there are obvious religious heresies rampant in today’s religious right, we do little good to treat them as such, from a holier-than-them theological soapbox, because the worst of these various authoritarian heresies have been with our Christian and Americans traditions since the beginning.

Moreso, some of the American versions of these heresies have mutated into an orthodox mask of unholy magic, whereby the preachers and proprietors of the Trumpist church now control narratives of Christian fidelity in certain sectors of the universal church. Moreover, the powers of prayer and persuasion, such as they are in the progressive Church and Christian left, have so utterly failed to rebuke and expel this evil Trumpist beast from our religion.

And any dreamy denials fail to understand how certain elements of this tyrannical and maniacal horror have been with us here since Columbus landed. So for those without time to read the rest, a thesis of sorts. Why does it feel so wrong to some to wrestle with this question: maybe the insurrection was as all-American and Bible-believing as its symbols suggest?

If we wrestle honestly, if we examine carefully, if we report our findings accurately, hasn’t this arrogant, entitled, aggressive, egregious effort been the all-American muscular Christian way always and already? MLK said our country is the greatest purveyor of violence the world has ever known. Full-stop. Why should we be surprised when some rich, entitled, aggrieved, angry, white Americans used violence to get their way? Not, as we should admit, in their minds, to start a coup, but to stop one.

Because in their world of conspiracies and controversies and “conspiritualities,” Biden lost. I don’t believe in some pure personal unreconstructed historical evil, not some singular Satan or devil character as accepted as fact by some religious folks. But if there were such a character in this phase of imperial Christianity, of course Evil would be a Christian, a tither or a preacher or President even, come to utterly ransack and render unrecognizable the church from within.

A few years ago during my stint as a congregational pastor, I was attending a small church conference, hosted by a right-wing remnant in my mostly progressive Protestant denomination. One of the workshop leaders flippantly remarked, in passing, that our PCUSA leaders no longer believed the historical confession that “Jesus Is Lord.” Because, get this, we acknowledged at a General Assembly some time ago, the validity of other faith traditions as having some integrity in revealing the God we know in Jesus and as the Creator of this wild creation.

I never experienced Christ’s authority as Christian exclusivism, but hey that’s me with my Quaker anabaptist anarchist tendencies. Interfaith isn’t anti-Jesus; exclusivism is. Because Jesus, if Jesus is Jesus, is radical inclusion.

In this recent context, Christian exclusivism excludes Christ and makes Trump their Lord and Savior. Make no mistake, the Christian symbolism that saturated January 6th was totally sincere and sincerely terrible. The so-called Christian “prophets,” these populist hucksters were so invested in Trump’s power that violent insurrection was the only antidote left to fiddle with the unreality of their utterly failed predictions.

When the Christians at the insurrection erected gallows to threaten murder, they murdered the Christ within all of us. But the Christians also murdered Christ when they killed indigenous inhabitants of Turtle Island. Christians murdered Christ when they hunted slaves and when some men murdered Emmet Till. Black Lives Matter is an essential part of an American religious reckoning because it reminds us that Jesus was lynched by the state, and with every extrajudicial execution of a black person by an officer of the state, we see that lynching and crucifixions are far from a thing of the past.

Christian nationalism is so anti-Christ that my take to amplify this take gets lost in the noise. But we need to keep saying it. Nationalism is anti-Jesus. Nationalism betrays the better take of liberation theology that is threaded through the entire Bible text: you know, the Bible as a story of overcoming oppression and declaring debtors jubilees and liberating captives and toppling kings and healing sick folks and feeding hungry folks. The Bible as liberation is such an obvious thing, that some of us are so audacious despite nationalist heresy, that we still cling to the Moses and Jesus stories, saying these stories are our stories.

And let this be said, this story isn’t religious per se, but it is in some bigger sense “political,” for everyone’s liberation and the healing of all creation. But yet, that sad and disgusting fact remains for a wide swath of white American evangelicals, there is nothing more Christian than nationalism, than theocracy, and everyone on the Christian left, the secular left, the interfaith ecumenical left, the atheist humanist left, we threaten and subvert this gross power grab at every turn. We are the heretics to them!

Others have said it on bigger platforms, but I will say it again: don’t say “This is not who we are.” America is Trumpism at one place, at one depraved, base, disgusting, well-armed, angry and unhappy place. For those of us in the resistance, remember the racist nationalist fascists are our neighbors and family members.

And why is this reckoning needed? This: a problem that has led to this sickening season of racist terror is our patent refusal to deal honestly and collectively with the racist terrors on which this whole experiment was founded. The healing hopeful radical alternative to alt-right nationalism is not neoliberal nationalism.

The solution to the problem of Trumpism is not Bidenism. Our hope, our other other option, our fourth-quarter-hail-mary, our last- ditch-last-stand is the Beloved Community. And for all our lefty liberal inclusive universalist faith folk, even for all our spiritual but not religious folks, I have a proposal for right now. It’s not yet time to take our Amanda Gorman poetry buzz into the meditation bunker for extended self-care sabbaticals (though periodic self-care and spiritual disciplines are a necessity).

It’s time, dare I say, to reclaim the religious vocabularies of rebuke and spiritual warfare to exorcise the evils of white supremacy and unfettered capitalism and effusive earth-rape and extensive economic exploitation and anti-body anti-love anti-queer repressions from our churches and communities. I want to call on some lefty interfaith prayer warriors to visualize global liberation and the Beloved Community by fighting with love, fighting against all these evil hatreds in our community and fighting for Black Lives, for Queer Lives, for the life of the planet itself.

Going into next week, I am praying for the impeachment trial to end in conviction, if that’s the Spirit’s will. I am praying for a stern rebuke of the leader of white nationalist authoritarian fascism in America, Donald John Trump.

Now, I know that spiritual warfare, exorcism, and rebuke are not comfortable categories for folks on the religious left. Some of us are victims of church hurt and church harm where rebuke was used against us for being gay, for being unmarried and having sex, for being divorced, for voting for Obama, you get the idea. So I encourage folks to do these prayers with others, hating principalities but not people, exorcising evil while maintaining empathy.

The best example of using spiritual warfare against demonic authoritarianism that I can think of comes from the Christian and New Age left in the late 60s and early 70s, when people did theatrical liturgies of resistance against racists and warmakers.

From my prayer bunker, this plea for justice and rebuke comes not from some platform of abstract platitude, pleading that perfect democracy that was somehow soiled by this lie-spitting monster. We have never been that more perfect union, as better as it sounded when Obama said it. So by no means do I see this as some holy crusade to save democracy or to shore up the base of the Democratic Party.

This is bigger than that, and actually, much simpler than that. Impeaching and now convicting Trump, rebuking Trump and his racist followers, these are acts of self-care and self-defense. Convicting Donald Trump and helping that sexist rapist racist fascist criminal finally find some consequences for his lifetime of evil. These are simple acts of boundary-setting and harm-reduction.

By excluding Donald Trump from the normal celebrity and distinguished sunset of other ex-presidents, doing this says to us and the world that some actions are evil beyond comparison, evil by every metric. Trump’s actions so violate even the most feeble and flawed social contracts as to merit a public scolding with tangible punishment.

May this stern censure spur some modicum of reflection and repentance by Trump and Trumpists, all the while setting some boundaries in this society to protect us from another authoritarian jerk coming to power again in 2024.

As bad as Trump’s regime was domestically, and it was the worst sleepless nightmare of my life, save my personal bottom in alcoholism, someone pointed out that the Bush-Cheney years perpetrated much more actual evil in the world at large. That Trump’s isolationist idiocracies spared us a nuclear war and only gave us a civil war, that is some strange blessing, but one as a lifetime anti-nuke anti-war activist, I am still grateful about this.

So come on people of goodness and generosity and gratitude, give some spiritual energy this week to this fight and setting some things right. Impeached once and acquitted. Impeached twice and convicted? May it be so? May it be so. 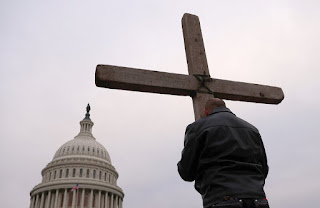