Calling A Truce In The War On Christmas 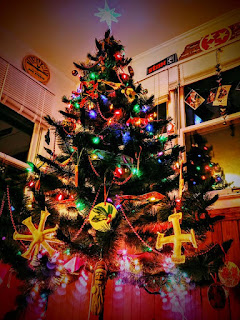 Note: a version of this essay appeared in today's Cookeville Herald Citizen newspaper. A longer version was my sermon for the first Sunday in Advent, preached at Blue Spring Presbyterian Church, on Sunday, December 2, 2018.


Did you ever notice that lots of family Christmas movies consider the threat that Christmas could be canceled? The canceling of Christmas seems to be an abiding cultural concern. What would it do to the children, what would it do to the economy, and what would it do to the church?
So we get the usual debates, about whether we can also say Happy Holidays, about whether we have enough Christ in Christmas, and the whole ‘War On Christmas’ controversy carries on, year after year.
So despite Christmas movies threatening cancellation and the so-called War On Christmas hype on television and social media, I am not the least worried about the erasure of any of our culture’s Christmas identity or community’s Christmas traditions, not this year, not any year soon.
However, Christmas was not always so safe. There was a time in England and America when Christmas was actually banned. It was not the atheists or secularists or interfaith advocates either, no it was Christians, Puritans to be precise, who cancelled Christmas.
That’s right, Christmas was once against the law. In 1659, the Puritan government of the Massachusetts Bay Colony banned Christmas, following the lead of the Puritan parliament in England, which banned Christmas in 1644. Sad to say, but Presbyterian reformers would have found themselves in the heart of the anti-Christmas camp back then.
That old-school Christian hatred of Christmas, responds to at least three strict strands in reformed faith. A Christian War on Christmas was anti-Catholic, some calling the Feast Day mere “Popish idolatry.”
This anti-Christmas crusade was also against the common folk, for whom the day had turned into a rowdy festival of eating, drinking, parades, and all kinds of outlandish carnival and even criminal behavior, kind of like Mardi Gras is today, but just in December.
Finally, the anti-Christmas Christians correctly noticed the similarities in our outward Christmas celebrations to ancient pagan rituals of a seasonal variety. So anything that seemed more like a general winter festival without Biblical authority was out.
Please forgive me for shattering any nostalgic notions that our Christmas traditions come from an unbroken Christian lineage going direct to the days of Christ. For one, nobody knows for sure the exact day that Jesus was born, and there are compelling cases made by serious scholars, for springtime, for April or for May, or for even September. We finally settled on December 25 during the 4th century, more than 300 years after Christ.
The magic of Christmas is not a primitive pagan notion, but the everyday practice of a powerful God. Instead of debating whether Christmas trees suggest too much God-in-nature, perhaps we might ponder again the true nature of a God revealed in a powerless infant, born in a cruel cave, in a Bethlehem backwater!
So I just wrote these words to say: We need to call a truce in the war on Christmas. As Christians, we need to be concerned about keeping Christ in Christianity; Christmas the holiday is already complicated and chaotic enough without our adding to the fight.

Posted by Teacher Preacher at 5:21 PM No comments: