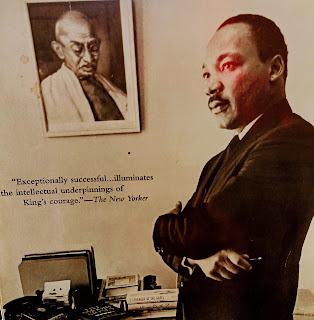 Audio-
https://soundcloud.com/andrew-william-smith/liberalism-liberation-mlk-sunday-sermon
Video-
https://youtu.be/cBkTlYZp7qA
My topic this morning is: “From liberalism to liberation in the light and life of MLK.”

In my remarks today, I refrain from a litany regarding the backlash against King’s dreams or accomplishments in our world today, especially in the attack on voting rights. While that is something we ignore at our peril, instead we will look more closely today at King’s genuine legacy and some of the hopeful signs, that it lives on. That is: “From liberalism to liberation in the light and life of MLK.”

In these last few months, I have loved my time of learning more about Unitarian Universalism, as I have been attending these Sunday at 10am Zooms with y’all and reading extensively about the UU tradition on my own. A mixed denominational marriage that emerged in the 1960s, UUs are part of the same tradition of 20th century liberal theology that gave us the genius of Martin Luther King Jr.

I fear folks today may not fully grasp the deep theological tradition of liberalism that inspired intellectuals in the 20th century, but I propose that some of the same streams that led to this UU denomination, also helped make the unique modernity of Martin King. When I say “liberal” this morning, I am thinking of this intellectual tradition, and it is not how most understand the term “liberal” today.

In his autobiography, which was really a compilation of his words provided by Clayborne Carson, King discusses the importance of intellectual growth and academic theology during his years at Morehouse, Crozer, and Boston University. In addition to a grounding in Greek philosophy, King wrestled with modern philosophers like Hegel, Nietzsche, and Marx.

King was indebted to his contemporaries in liberal Protestant theology—Paul Tillich and Reinhold Niebuhr and Howard Thurman. Mohandas Gandhi and Henry David Thoreau—perhaps his greatest influences—they come from far outside his Baptist upbringing.

While he was a teenage undergrad at Morehouse, he talked about shaking off the shackles of fundamentalism. For him, religion had to be completely compatible with modern thinking, including science. Surely, someone, with more depth than I will provide today, has traced King’s particularly robust small l-liberalism.

Yet, when I went looking this last week, much of what I stumbled across was conservative evangelicals today, using King’s progressive views, to dismiss him as a heretic, as not a real disciple of Jesus. As for me, someone who has recently left organized Christianity, Christians telling other Christians that they are not real Christians is one of my profoundest pet peeves.

When I look back at these college papers that have drawn so much interest from his hardcore naysayers, I see King’s expansive mind and interest in a religion that pairs with reality.

Topics that tickled King’s critics included things like a paper he wrote on the influence of Greco-Roman mystery religions, that’s right paganism, on the formation of Christianity. While the overlapping themes and stories between Christianity and many pagan mystery religions are well-documented, this topic tends to make orthodox Christians uncomfortable, thus their frequent defensiveness about these findings.

King, on the other hand, argues, “To discuss Christianity without mentioning other religions would be like discussing the greatness of the Atlantic Ocean without the slightest mention of the many tributaries that keep it flowing.” Of course, this metaphor subordinates other faiths, but gives them credibility; today, we might say that interfaith and interspirituality are the real ocean.

But the essay by young King that was the real bombshell to truly bother today’s fundamentalists is where King questions the virgin birth, the divinity of human Jesus, and the bodily resurrection, all in one brief essay. In short, King did not feel he needed the Apostles Creed to end up a powerful Baptist preacher. The biblical teachings and selfless sacrifices of the historical Jesus were more than enough to inspire and fire-up King.

As to God, King was far from an atheist, but had a vast and cosmic consciousness when it comes to the creator of the universe. A King quote with profound resonance, speaks to this cosmic understanding: “We are caught in an inescapable network of mutuality, tied in a single garment of destiny. Whatever affects one directly, affects all indirectly.”

In 2020, a preacher wrote that Covid really helped him finally understand this idea of Kingian cosmic interconnection: “My own welfare can only be found in the welfare of my most vulnerable neighbor. Prophets have been saying this for millennia. Now I see it, and there is no un-seeing it. . . . None of us is safe until ALL of us are safe.”

A queer writer from the 20th century, Arthur Evans, drew his inspiration more from Walt Whitman than from Martin King, but he also leaned into this universal place of cosmic creativity. Evans wrote, “Here is where we find the font of the magic of life, for that font is people themselves when self-integrated, flowing with expressive creativity, and connected in body and spirit to each other and the cosmos.”

“Here the boundaries of the self expand, and its windows open outward to the goodness and beauty of the whole, which it takes in with exuberance.”

Aren’t there echoes of these cosmic ideas in our seventh principle as UUs?  “Respect for the interdependent web of all existence of which we are a part.”

For King that goodness was always expressed as love, as unconditional, universal, agape love. And its roots are in a religion infused with liberalism and universalism. But its practical social application for King was always more radical, than just liberalism, it always led society to a vision of complete human and cosmic liberation.
King’s idealism did not protect him from identifying collective evil in the world, which he named as racism, materialism, and militarism. King named his radical antidote to these awful realities: the Beloved Community. The Beloved Community, maybe you have heard this phrase, which originated with Josiah Royce.

According to the King Center, “Dr. King’s Beloved Community is a global vision, in which all people can share in the wealth of the earth. In the Beloved Community, poverty, hunger and homelessness will not be tolerated because international standards of human decency will not allow it. Racism and all forms of discrimination, bigotry and prejudice will be replaced by an all-inclusive spirit. . . . ”

“In the Beloved Community, international disputes will be resolved by peaceful conflict-resolution and reconciliation of adversaries, instead of military power. Love and trust will triumph over fear and hatred. Peace with justice will prevail over war and military conflict.”

By the end of his career which was cut short by an assassin’s bullet, King had turned his practical social justice work away from the primary struggles of racial integration and voting rights and focused on the structural changes needed for economic reform and ending the Vietnam war. Both of these radical movements --promoting peace and ending poverty-- that captivated the late King, also raised the ongoing ire of the conservative establishment and law enforcement profession, including the FBI, and its paranoid fear of strong black leaders, which meant constant surveillance of King and extended to the war against groups like the Black Panthers.

King was ahead of his time to advocate for what he called a “guaranteed national income.” The conversation has returned in our world as “universal basic income.” During a pandemic, the need for this kind of immediate relief and sustainable security is amplified.

King said in one of his last great speeches, “Where Do We Go From Here”: “The dignity of the individual will flourish when the decisions concerning [their] life are in [their] own hands, when [they have] the assurance that [their] income is stable and certain . . .” King was right.

Today, more than ever, we are realizing that we were made for many pursuits, more than only wage labor. Economic security for the most vulnerable is everyone’s responsibility.

As we recall, King’s last marches were in Memphis, Tennessee, as part of a labor strike by sanitation workers. Today we are inundated with stories about a labor shortage, which is really just a living wage shortage, a humane-and-democratic-workplace shortage.

Last October got called Striketober, as we saw one of the most significant waves in labor activism of this century. During Striketober as many as 100,000 workers participated in or prepared for a strike, at places like Kellogs, McDonalds, Nabisco, and John Deere. Recently, baristas in Buffalo won the vote for the first unionized Starbucks in the United States. The Amazon workers in Besemer, Alabama are going to get another shot at their unionization vote.

Just as the liberal theologian King questioned the strictness of doctrine, the human liberationist King brought heaven to earth in the form of a radical beloved community. In his last speech in Memphis. the day before his death, King preached this:

Just as the arc of King’s activism career from Montgomery in 1955 to Memphis in 1968 followed from liberal philosophy to liberationist prophecy, I believe his legacy would move forward with today’s struggles for gender equality and queer liberation, for environmental sustainability and combating climate change, for an end to mass incarceration and the death penalty and for long lasting radical reform of our law enforcement professions.

Were I to make a thorough scan of the Justice and Inclusion links on the UU Association national website, these would read like a primer on Kingian values and visionary practices for the 21st century.

With all the hard work of this congregation, especially in our work to support those incarcerated at the Putnam County Jail, we are walking our talk so that one day, together, the dream will be fulfilled and the Beloved Community will be our reality. And we won’t just wait for one day, but we will see that some dreams are realized in the now, today. May it be so.

Posted by Teacher Preacher at 5:46 AM