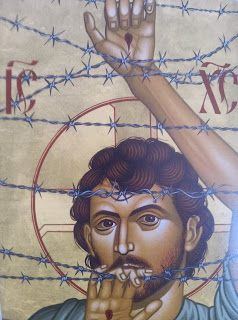 Maybe Christ isn't King. Maybe this is better for Christians & the rest of us.
Maybe church doctrine concerning Christ's Kingship is just like the big lie of January sixth, but it has lasted almost two thousand years.
Maybe we still need Jesus’s documented take-downs of worldly authority, much more than we need his authority.
Maybe Lord & King & God are just titles to paste like bumper stickers on the chariots of colonial conquest; maybe all these royal pretensions are just banners to march behind.
Maybe Gods & Masters in the abstract are as bad as Popes & Presidents & Prime Ministers in the flesh.
Maybe what Christians honestly do best are confession & forgiveness & not politics & empire & in the almost 1700 years since the Council of Nicaea, maybe it is time to confess that we don’t know what we don’t know about those mysteries of the faith that were supposed to be mysteries, not mallets with which to bludgeon heretics.
We confess we don’t know what the Trinity means, we don’t know what Christ’s divinity means, we definitely don’t know what Christ’s kingship is, & based on the earliest gospel accounts & per scholars like Bart Ehrman, it doesn’t look like Jesus knew yet either.
My liberal & lefty Christian friends like to say that “Jesus is Lord means that Caesar isn’t” (& they really mean that Trump isn’t), but we do not say what it would be like to live without arbitrary authoritarian masters of any kind, in that inescapable network of mutuality that some of our modern prophets described as Beloved Community.
But what does Jesus as Lord & King really mean? Isn’t the “mocking of Jesus” by the authorities in the passion narratives so important, because Jesus in his earthly ministry mocked all ecclesial & political authority in gestures of loving subversion & miraculous sabotage at every turn.
Cultural & literary scholars at least make prescient overtures to the presence of Jesus really being about overturning tables as well as priestly & authoritarian impulses, not creating new orders of priests.
Stealing from scholars stealing from the gospel about the passion & its mockery: soldiers spitting & taunting actually invert coronation with an anti-coronation. Contempt instead of reverence, crowning with cruel crowns of thorns & casting random lots for royal robes.
Is this not the radically inverted ceremony of the carnivalesque, only foreshadowing the carnival of beloved revolution when the first really are last, when the spoils of the 1% really are redistributed among the world’s poor?
Of course poets & artists & some preachers & some theologians & other radicals have all always understood this ironic & destabilizing theater to be a brilliant, tragic, & poetic part of the passion & the cross. Even the songs of Christmas as they deploy regal & royal imagery do require that we are siblings of slaves, also that women are the magnifying rebels that deny rich rulers, also that infant rulers rule by the tyranny of powerlessness & tears & needy appetites & childlike wonder.
But the actual cradle & the actual cross have been too inconvenient to accept for power-hungry Christians for a long time. They prefer lobbying for the unborn prophets & refuse the basic stipends needed by needy mothers to raise the world's future messiahs. They have no problem crucifying others, though, as the victims of war & torture & police brutality bleed still into our consciousness from their collective empty tombs.
Bob Dylan is still singing “You Gotta Serve Somebody,” decades after he abandoned his born again phase, because the lyrics are so true, because atheists & theists still must choose what is their ultimate concern. I don’t think we can worship worldly power & the powerless mocked & crucified one at the same time, & I am not sure Jesus needs our adoration today as much as he desires our solidarity.
If we only serve Jesus as “king” & “lord” in a world that only knows the language of power, maybe we will never be able to serve alongside him as friend & fellow servant, as embodied love that is always & forever in a human body, as love for the hungry child & tortured prisoner & ailing patient.

[tomorrow is Reign of Christ/Christ the King Sunday in the liturgical churches; graphic from "Christ in the Margins" by Robert Lentz - 2003]

Posted by Teacher Preacher at 10:44 AM