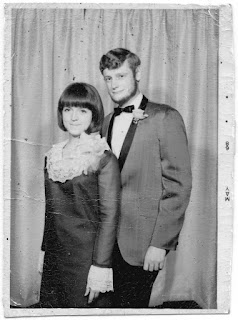 The summer of love lingered in Tennessee, got started in late September 1967, and didn’t completely heat up until around the winter holidays for two compassionate Tennessee Tech history majors.

Before 1967, Nelia Tripp of Lawrenceburg, Tennessee did not seem that different from many of her ambitious female peers. The former high-school cheerleader was a beautiful young brunette decked out in matching Bobbie Brooks outfits with roles in student government and an underground sorority to her credit. She already had a boyfriend, who would that November purchase a diamond ring for a proposal that would never take place.

But in the months preceding her intense encounters with the tall, skinny guitar-and-banjo player from Nashville named Calvin Kimbrough, Nelia had been undergoing the first serious phase of a radical transformation that would continue to shape her for the rest of her life, what she described as a “complete 180-degree turn,” including international travel and a change of majors from Accounting to American History.

For one, her mother suffered from a bipolar disorder, even though this mental illness remained undiagnosed then, that revealed itself in intense manic fits that were difficult for Nelia, who recalls, “I had gone home at Christmas of my junior year, and she was just absolutely berserk.” In early 1967, Nelia continued her one-on-one counseling with Bob Lewis, the campus minister for Tennessee Tech’s Wesley foundation. She reflects, “When I came back from Christmas break, I had a session with Bob and I said, ‘I’m never going back to Lawrenceburg again.  I’m not going home this summer; I’m going as far away from my mom as I can.’” Not only impressed with the young woman’s enigmatic beauty and keen intellect, Lewis also helped her develop a plan for freedom.

When I met Bob Lewis for lunch and coffee at the Thistle Stop Café in West Nashville in January 2015, he had an enthusiastic sparkle that made him seem much younger than his years, a sparkle that lit up whenever he spoke of his initial meeting with Nelia. At their next meeting, not only did Bob Lewis provide a scheme for Nelia’s coming summer, this plot provided several hours of college credit.

She remembers, “He handed me this brochure from the Board of Higher Education. The United Methodist Church was sponsoring a tour for students in the Soviet Union.” The 10-week adventure would be led by academics from American University. Despite Bob’s encouragement, Nelia thought, “No way. I had no money.” Yet Bob Lewis convinced her to write the required essays and complete the application. Then, he applied for and secured a loan to fund the trip. “And I came in one day for a counseling session,” Nelia shares, “and Bob said, ‘Well, here, sign this paper.’ And I signed the paper, and he handed me the check, which I paid off for many years.”

Come summer, this expedition brought culture shock not just to Nelia—who had just turned 21 and therefore felt bold enough to take this journey—but to her whole family. She remembers the dread and defiance of her departure: “So I had never been on an airplane. My parents drove me to Nashville and were horrified. My whole family was horrified that I was going to the Soviet Union because they thought that was the place of Satan, and the Cold War, and how could I embarrass my family that way, with what was I doing.” But brave Nelia went and learned lots from people she had never met before.

After extensive work in the Soviet Union, going to Czechoslovakia conjured quite the contrast. “And from there, we came out into Prague,” Nelia explains. “We were there right before the spring invasion, and Prague was alive—all the artists and writers and poets! It was just so amazing to come there after being in the Soviet Union.” In Prague, this former high-school cheerleader from the former confederacy inhaled the air of the international youth revolution that defined the 1960s for some and defiled it for others.

When the students returned to Cookeville for classes that fall of 1967, Nelia and Calvin rubbed shoulders at a mixer, because they were both student leaders. While the culture shock of returning to the United States was hard enough for Nelia on its own, she had also been sick, and to make matters worse, most people did not seem to care how her world had been turned upside down or how what little was left of a conventional worldview was being upended. People didn’t really want to hear about her experience of the Soviet Union, much less the deeper kinds of questions this journey kindled.

But Calvin was different. He didn’t just like Nelia but wanted to learn from her. “Calvin, however, was intrigued at that [student leaders] retreat, and he started asking me questions. And questions led to dates, and dates led to passion, and then we got together.” By the Christmas holidays, they were most definitely a thing. A couple. The spirit of their relationship also reflected the spirit of the times. They both grew out their hair and started adopting the more comfortable, colorful, and unconventional clothes embraced by the more restless youthful spirits of the period.

Just as Nelia was utterly transformed by her excursion to eastern Europe, Calvin, too, would have his own mind-blowing, life-changing experiences. At the end of 1967, after they were clearly together as a couple and had been to the respective homes to meet the respective families, Calvin embarked to a conference in Cleveland, Ohio, simply called “The Cleveland Week,” a culminating event of “Process ’67,” sponsored by the University Christian Movement.

The conference brochure—which Calvin has kept in one of his numerous, well-organized scrapbooks—boasts that attendees would engage in “a style of education which is dialogical, nonauthoritarian, issue- or problem-centered, and future-oriented.” The leaders for the conference were dubbed DEGs or Depth Education Groups and were steeped in topics such as “liturgy, public opinion, psychedelics, theology, the military draft, technology, the church and its relation to the university.”

With thousands of attendees from “Protestant, Roman Catholic, Orthodox member groups,” the week looked towards “social change through the reformulation of the university.” From art workshops to film festivals to jazz bands, all broadcast to every conference hotel room on closed circuit TV, according to the Cleveland Plain Dealer article of the time and to this 21st-century observer, Cleveland Week appears more like a hippy happening than what most people might think of as a mainline church event.

By comparison to the distinctly conservative evangelical vibe found at today’s praise conferences, it’s difficult to describe the extent to which the gatherings and ecumenical activism of college Christians comingled with the larger changes heralded by the militant New Left and secular counterculture. As vividly and meticulously documented by the Methodist Student Movement’s visionary motive magazine, an activist and artistic revolution was already taking place on the Christian left years before the carefully branded “Jesus People” would co-opt the religious counterculture to much more conservative ends.

Calvin clearly had his mind blown by the experience in Cleveland. A love-letter sent to Nelia in a Sheraton Hotel envelope is scrawled in bold-black marker on pink tissue paper. The joyful author of the love note admits to wishing he had brought boots and love beads. Calvin describes meeting the colorful collection of all the other Christian activists, “It was the first time I had ever encountered blacks with afros in overalls, and men with long hair and beards, and of course I didn’t have long hair and a beard, but it was wonderful being there.”

As the older Calvin recalls that event, it’s as if he is once again caught up in the energy of the time, and by sharing the story, we can feel the power of the revolution, too. Just as Calvin had his mind opened at the close of 1967, our minds might adjust our vision to just what was going on for this young couple and probably many others in the religiously-rooted youth movements of the era.

We wouldn’t have this love story if it were not for the sacred intuition of a mentor like Bob Lewis, but this personal love story includes,  yet transcends, our biographical subjects and intersects both culturally and spiritually with the larger love story of the late 1960s. It’s an incredible witness to an irresistible form of refreshing rebellion that the youth revolution of the ‘60s would have its own outposts in a conservative town like Cookeville, Tennessee and at a campus like Tennessee Tech and in a fellowship like the one that grew up around the Wesley Foundation. It’s a loving, radical, youth revolution that, for these folks, was deeply rooted in the body of Christ.

If you would like a copy of the complete Banjo & Bread as an Adobe PDF, please send a message to Andrew Smith at:
preacherandrewsmith [at] gmail.com with 'Banjo & Bread' in the subject line.

Posted by Teacher Preacher at 5:33 PM