MLK50: Liturgy of Fire & Blood at the Lorraine Motel 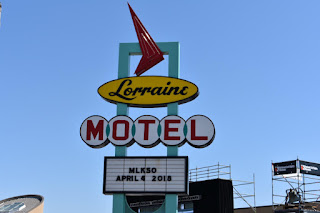 I am still shaken to my core by last Wednesday’s April 4th liturgy of fire and blood.

This was no misty commemoration but a courageous confrontation with the wicked worldly continuation of the triplicate evils of racism, poverty, and war that King died to end; and this was a testimony to the risky resurrection tenacity of the beloved community that King died to create.

At a ceremony that opened in reverent invocation, we prayed. At the end with irreverent incarnation, we danced. We danced to Al Green until they cut his mic during “Let’s Stay Together.”

The speakers could not help but speak of this as the site of a crucifixion. Jesse Jackson trembled at the lectern, his voice weakened by age, but he still spoke truth to power, tired he might be after decades of love and rage.

Reverend Barber lives his roll, wearing a stole that says “Jesus Was A Poor Man.” And he somehow shot through our souls a bold word that stripped the sheen from every simplistic meme of the day. He just preached us back to our deep movement roots and dared us past darkest truth.

“We must be the resurrection,” he warned. “We need to reach down into the blood,” he pleaded. “We need to hold up the blood-stained banner,” he preached.  The moral revival at which Barber currently presides is a nationwide grassroots movement of direct action to rebuild and be our generation’s iteration of King’s Poor People’s Campaign.

At one point a parade of paler complected Tennessee politicians went to the parking lot mic to welcome us, only for two-out-of-three of them to be drowned in a thunderstorm of boos. Thanks be to God their remarks were so brief; even fifty years later some of us are still dealing with the grief.

If this motel in Memphis is King’s Calvary, then the historical controversy about the conspiracy to kill King might ultimately ask the wrong question.

Let me say for the record, even as I have looked at some but not all of the monographs about King’s death and some but not all of the theories that surround it, that if this was indeed our culture’s crucifixion of a sinner and a saint, a leader and a liberator, then we do not ultimately need to take a side on the possible problematic innocence of James Earl Ray or on the implicit guilt of elements within the federal government.

Of course behind all the books and research, one story is truer than the other, and I remain undecided but am uncomfortable with claims I have heard from both sides of the debate. Strangely, it seems wrong to assume it was a conspiracy and wrong to assume it wasn’t. We can pick a theory, but we do not need to, not if this was a crucifixion.

But if in fact America crucified King, which after Wednesday my heart tells me we did, then the only true answer for me theologically is that we all killed Martin King, and white Americans share that responsibility with a special kind of accountability. This for me is a moral and theological fact, that only by wrestling with repentance from racism, will we ever comprehend.

We cannot wring our hands; we can go church with everyone else this somber and searing day, and in the days ahead, and raise our hands, waiting for the next bell to ring.

The bells ring and keep ringing. My voice may be singing, but my heart is stinging, because we still have so much work to do. Hold it up, the preacher said. We have got to get back to the work of being the people who bring King’s resurrection to the whole world.

Posted by Teacher Preacher at 3:08 PM