On Spectacles, Statues, and Salvation: Not Another Blog About Charlottesville By A White Anti-Racist Christian 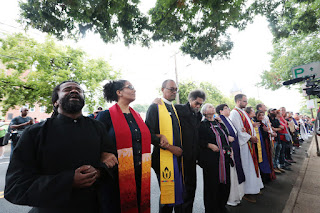 "When the young man heard this word, he went away grieving, for he had many possessions." Matthew 19:22

To paraphrase a white-activist theologian paraphrasing a legendary black civil rights leader and theologian: "Why are there so many white theologians wanting to do black theology? Where are the white theologians doing the theology of the drug epidemic in white communities?" Now a new theology of addiction might be a topic for another blog or even book, but as a white academic theologian who does liberation theology, this point gave me pause.

Nothing like the events and aftermath of Charlottesville to make me want to rip up my "ally card" (fact is, we don't have those), not because I am any less committed to the difficult, lifelong work of being an anti-racist white person (this must continue) but because I am sick at heart about my own hypocrisy and complicity in light of the cosmic dissonance and karmic debt wrought by the Original Sin of white racism in North America.

I am sick at heart for the social media discourse about these events. I am sick at heart watching progressive white people posturing and white people engaging in rhetorical jousting around these issues. I am sick at heart from people bashing Bannon (or bashing Trump or bashing David Duke or bashing the various hate groups gathering momentum)--not because these figures did not earn every call-out -- but because we are simultaneously refusing to look at our own unexamined or even uncritical participation in -- and benefit from -- the system that allows and produces these hate groups. How can I say anything else that won't just add to the hurt!?

Yet because white silence is even worse, here is yet another blog by a white Christian anti-racist about Charlottesville. Yet because an old friend from our interracial suburb just outside Detroit asked my opinion about some of this, and because it just won't stop brewing in my head and heart, here are a few intellectually and theologically and I hope morally-grounded thoughts nagging at my guts that need sharing. Forgive me if I get any of it wrong or over-complicate any of it; feel free to disagree in the comments or by sending me a private message.

I feel our ability to quickly anger and alienate each other in these conversations comes in part from looking at everything symbolically and through the lens of spectacle. Our hearts are not our t-shirts, on the sleeves of which we wear our hearts. We are not bumperstickers and slogans, memes and tweets, sensational television clips on endless loops.

Our culture thrives on the hyper-distraction of media over-stimulation, and now, this is exacerbated by the illusion of conversation on our Twitter and Facebook feeds, where we each get a megaphone to shout in each other's ears. I've seen too many superficial statuses trying too hard for substance! Now, yet even the therapeutic satire of comedic critique has become the nauseating refuge of people with so-called "white people problems" failing yet again to come up with white people solutions.

We are forever the rich young man of Matthew 19:16-30, and our black colleagues are speaking for Christ in this case. What do we need to participate in the Beloved Community? Because white Christian liberals want nothing more than to live in the interracial paradise promised by Martin Luther King at the end of I Have A Dream -- or at least that is what we have been telling ourselves.

Our black colleagues say if you want reconciliation, we need reparations. We need you to give your tithe to fight systemic racism and address the root causes of racial injustice; we need you to divest from your white fragility when we challenge you on these issues; we need you to renounce the satan of white supremacy, which for us might begin with toppling every statue and shredding every flag that symbolizes the slavery and subjugation of black bodies.

These requests, mind you, my fellow white siblings, are just the beginning. But we are the ones, like the young rich man, who walk away hanging our heads, because we have many entrenched illusions. Because we can hear our Lord saying, "It is harder for a white American to inherit the Beloved Community than . . ." So like the rich man in the Biblical parable, we walk away hanging our heads, to take refuge in Stephen Colbert, to eat sheetcake with Tina Fey.

It's certainly uncomfortable to admit that President Donald Trump (who many of us prefer to simply call by his nickname #45) "had a point" in his provocative gestures of the past few days, but in our efforts to fall all over each other to denounce his "moral equivalency" we ignore our own moral complicity, much less a provocative point about statues.

Any American who has taken any history class can see how offensive it is to put Robert E. Lee or Nathan Bedford Forrest on the same pedestal as George Washington or Thomas Jefferson. But as a Christian, I am glad Trump reminded us that collectively white Americans stand on the shoulders of people, even Presidents and founding parents, who played a part in perpetuating or propping up profoundly unjust systems. Of course Trump was defending "white cultural heritage" in more than problematic ways, but the "we have all sinned" aspect of what he said should give us pause. See as a Christian, I should renounce all idolatry, not just the most offensive idolatry. For a Christian, all flags and all statues are spectacular false symbols, and if I am too attached to any of them, they are distracting me from my allegiance to the living Christ.

One symbol we will not let go, as Christians, that symbol is the cross. It is the most offensive symbol of all. It is a vulgar and humiliating reminder of Roman imperial torture, a death sentence on the deviant and the defiant, the victim and the vulnerable. Why don't we take away that symbol, that ugly reminder? In part we cling to the cross because we are crazy to believe our salvation is there, in sacrifice not in domination, in weakness not in strength, in love not in hate, in one death for every life.

The prolific black theologian James Cone has reminded that the cross for black Americans is the lynching tree. Is that the statue we need to build in every public place, to remind us to not erase our history? Not white men riding horses but black men hanging from trees? This is entirely offensive, but we need to face it. That is our cross to bear America. That is our Christianity. If Jesus is Lord, then white cultural heritage isn't. If Jesus is Lord, then statues are not.

Uproot the statues and with them uproot every cultural and historical and religious lie that allowed them to be built. If sin is sin is sin, racism is one from which we need to repent. Racism is not our only corporate sin, but we got to start somewhere. Our black Christian siblings have reached out their hands in love and grace for generations to offer us paths to racial reconciliation, but when we realize it requires our repentance and even reparations, we get scared. We cut and run. But Rabbi Heschel said, "Some are guilty. All are responsible."

We run to rationalizations and our own recommendations and finally try to rewrite scripture to engineer our own salvation. We are so addicted to the benefits of our privilege that we cannot see how blind we are to the utter impossibility of our color-blindness. The recommendation of Jesus is suddenly insufficient for us. We refuse to give up our racial privilege and our racial fragility to follow the only One in whom there will finally be no white or black, no rich or poor, no slave or free.

Many of our black colleagues are tired; they are fed-up and frustrated; they are not required to give us talking points and reading lists to help us repent. Friends, we got to step up our game and get in our Bibles, we got to learn and relearn our American history. The charge that the critics of white supremacy want to erase history could not be a more disingenuous charge. It's time, again it has long been time, to be honest, to be humble, and to put our hope, not in leaders or statues or ideological systems, but in Christ.
-Cookeville, Tennessee, 8.19.2017

Posted by Teacher Preacher at 5:23 AM