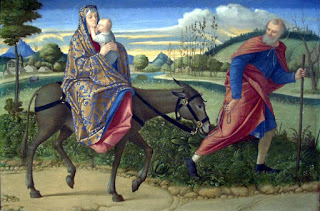 “Fight or flight” describes a theory about how humans and animals respond to stressful and threatening situations. Today is New Year’s Day and people around the world have stopped fighting the tragedies of 2016 and have taken flight into the possibilities of 2017. Like many of my friends of my generation, raised in the 70s and 80s, we have mourned the 2016 deaths of American celebrities, like a music star called Prince who died in April or especially last week’s loss of a movie icon Princess, the great Carrie Fisher, followed the next day by her mother Debbie Reynolds. But today’s sermon takes us far away from the early deaths of this world’s pop Prince and Princess to the two different kinds of Kings we find in the gospels of the New Testament.

References to Jesus as royalty -- even in his childhood -- prompt us to recognize that, this King of love and liberation is not the military or political leader some wanted for their Messiah. Even today, historians and theologians debate the nuanced nature of this difference in the meaning and ministry of Christ. The author of Matthew clearly wants his Jewish readers to see in Jesus another Moses, to view Jesus as the new Israel. Fight or flight -- the emphasis in today’s story is clearly on flight more than fight, or maybe, on flight as a different kind of fight.

This gospel reading is a difficult one as a barbaric tragedy overshadows the beautiful mystery of Christmas. But we can contrast Herod’s fear and hate with Joseph’s prophetic faith and hope. Herod wants to fight, but despite his cruelty in what is called the ‘slaughter of the innocents’ -- he cannot succeed against the secretive flight of the Joseph family, helped as they were by strange dreams and the shrewd and holy deception by the wise men. When we are dealing with a Herod, even the Bible shows it is sometimes right to tell a lie.

A few weeks ago, we learned how Mary and John the Baptist sacrificed to do their part in the Advent stories. Joseph and the wise men are the heroes of this Christmas story. Joseph listens to the voice of God in four profoundly important dreams throughout the early pages of Matthew. Thanks to the angels speaking to him in his dreams: 1. he does not divorce Mary and gets married to Mary instead; 2. he flees from imminent harm in Bethlehem; 3. he learns of Herod’s demise and the safe time to return to Israel; and 4. he is instructed to go back home to Nazareth in Galilee. All from some dreams.

Even today, we as Christians need to discern the still small voice of God from all the competing voices in our culture. If your dreams are anything like mine, dreams are not usually the first place I turn to learn about God. I generally turn to the Bible first, then my teachers and mentors next.
But if I have been studying and praying the night before, and I am behind schedule on sermon prep, sometimes I will wake up in the middle of the night to start or finish a message. But let’s be real, sometimes the voices in our head can be as much about what movie we watched last night or what song we listened to all day or what we are most afraid about or even what we had for dinner that didn’t agree. The scary thing is that Herod is probably listening to some pretty strong internal voices as well.

According to scholars, Herod was culturally Greek, politically Roman, and religiously Jewish; he was considered brutal yet brilliant. He had 10 wives and had his favorite wife killed when he feared she would betray him. He considered his sons rivals and ordered two of them strangled to death.

Herod was known as the King of the Jews, and he felt irrationally threatened by the baby King born in Bethlehem, the baby King we as Christians know as our true King. Despite Herod’s earlier collaborations with the likes of Antony and Cleopatra to his credit, Christian history does not judge Herod sympathetically, as his allegiance was to himself and to Rome, not to God. This Herod the Great, who will die in today’s readings, is not to be confused with the later Herod Antipas, a son of Herod the Great who we will meet again at Christ’s trial.

Herods are gonna hate, and this first Herod doesn’t seem to contemporary Christian readers as remotely great as his title boasts. No doubt the world of 2016 has Herods, too, but our world is so polarized that one person’s Herod may seem ironically heroic to someone else.

As exciting and perhaps complicated as the drama and intrigue are, this is shocking for a Christmas story. A worldly king was ready to kill the king of peace before his ministry would even begin. Desperate despotic kings that want to kill children: a sickening reality that invokes both a fight and a flight response.

The invitation to Christian discipleship shows that a life in Christ is better than a life enslaved to selfishness and sin, but the Christian walk is not a life of perfect ease and comfort but a life of courageous risk and challenging witness. A Christian idea that is very important to me is our dual citizenship.

We are in the world but not of it; we are the citizens of not one kingdom but two. We are dual citizens of this world and the world that is to come.

Christ has come and so much of God’s reign was accomplished in his ministry, on the cross, and in His resurrection. That is the kingdom already. But as the misery and evil of this present world so painfully demonstrates, there is still more to be accomplished for God’s love, God’s mercy, God’s peace, and God’s justice -- the kingdom come. That is the kingdom of the not yet. We live between the already and the not yet. When we partake of the Lord’s supper this morning, we will have a memorial meal to Christ’s ministry on earth and a foretaste of the kingdom yet to come.

We want to be like Joseph, but sometimes we need to admit that we have an inner Herod that we are wrestling with too. Jesus did not need to die a brutal death on a Roman cross because the mass of humanity are like his stepfather Joseph; Jesus died for selfish angry sinners who are a lot more like Herod than Joseph. It is scary to think that for Jesus to later die so that we might live, first these unnamed children of Bethlehem will die, so that Jesus might live another day as a young child to later live out his destiny as a young adult.

We know that sometimes we have to choose between wrong and right, between darkness and light, between the way of the new day and not the long night. As the great poet singer Bob Dylan wrote, “You’ve to got to serve somebody. It might be the devil or it might be the Lord, but you’ve gotta serve somebody.”  The baby Jesus and his family don’t stay in Christmas exile in Egypt. They come home to the small town of Nazareth.

Being from Nazareth but born in Bethlehem would be like being from Sparta but born in Nashville. Jesus is not a city slicker like I used to be but a small town man like some of you.

In wanting to learn more about the history of White County, I discovered something special about the Presbyterian preachers who have preceded me. I can trace my lineage to my place here and tread knowing in whose footsteps I walk. Let me share with you from what I found “Legends & Stories of White County, TN” a Master’s Thesis in English by Coral Williams from Peabody College, written in 1930, 83 years ago.

This story comes from one of our predecessors, a preacher during the Civil War, when this area was deeply divided. “Jessie Hickman was a distinguished Presbyterian preacher in the county [who] remained neutral throughout the war. At one time he and [another man] were taken captives by the Federals and condemned to be shot [as] prisoners [. . .] before the firing squad. When all was [ready], the preacher asked for a word of prayer. The request was granted. He then invited the captain and the guard to kneel. The prayer was so fervent that at the close of that prayer, the captain ordered that the two prisoners be freed and [. . .] escorted home.”

It was not a fight he could have won and a flight that would have surely failed, but fervent prayer saved pastor Hickman. In a fight that was destroying his state, his region, his community, and perhaps his church, he refused to take sides -- and stood aside with Jesus.

We can lean on each other and lean into our sacred flight to the future kingdom come by listening to God’s word and by being the church. We cannot all be princes and princesses and kings, sometimes we are everyday heroes like loyal stepparents and loving grandparents. God is always asking unlikely servants and surprising underdogs to do God’s work and protect God’s children. God is even asking the Presbyterians of White County, Tennessee to bring the kingdom in our communities, and the more I get to know the people of these churches and the work we are doing, I realize how this is already happening.


Allegiance to the reign of Jesus Christ is not a New Year’s resolution but an everyday way of life for those who follow the carpenter from Nazareth in Galilee. Let us take flight to heaven when it is our time, but in the meantime, let’s fight with love for the kingdom on earth as it is in heaven.

[image The Flight Into Egypt; Vittore Carpaccio; Date: 1500; Italy]
Posted by Teacher Preacher at 4:08 AM