They’ll Know We Are Christians By Our Lunch 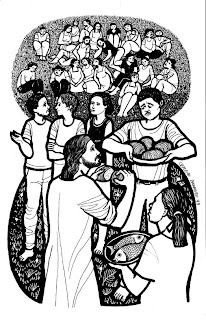 Now, we know that the song which I learned in the 1970s says that they will know we are Christians by our love. But in this feeding-of-five-thousand Sunday-School-staple-of-a-scripture, Jesus and his disciples show their love by giving the people lunch.

In her book Jesus Freak, Sara Miles breaks down the miracle this way by writing: “Jesus consistently chose unconventional table fellowship as the sign of God’s kingdom. And so faced with a crowd of five thousand, he drives home the message he’s been preaching…by inviting everyone to share a meal on the spot. Do this, says Jesus, and you’ll taste what life in the kingdom of God is like.”

Covenant family, Reverend Quincy, Mom and Dad, thank you for inviting me to share this pulpit. Covenant family, do you know what the Kingdom tastes like? Some people have said that heaven is like a church service that never ends. But I say heaven is more like the potluck after church. Did you taste the strawberries & shortcake Jeff prepared two Sundays ago? Now that’s what heaven tastes like if you ask me. All that & whipped cream on top, too.

In today’s world, this Jesus of the Gospels, don’t you know, is, for better or worse, a pop culture guru of a God—and he is also a culinary genius. This Bible is a story book, a rule book, a poetry book, a prophetic book, a teaching book, but it can also be a cookbook. Mary Fairchild has compiled a list of over sixty foods found in scripture. We could make a lot of meals with that, with foods like venison & lamb, leeks & lentils, apples & almonds, pistachios & pomegranates, made tasty with spices such as cumin & coriander.

Jesus & his practice of open table fellowship reflect a man that we know not only as carpenter but also as a caterer, a savior but also a server, a shaman but also a chef. Jesus doesn’t just multiply manna for others, He also likes to get his own grub on, so much that they called him a glutton who sometimes forgot to wash up before meals. Or as one my seminary professors loves to say: He is always eating—or being eaten. Yes indeed, they’ll know we are Christians by our lunch.

Because the feeding miracle is so foundational to our faith, its familiarity might breed forgetfulness or our failing to fully grasp its generous gravity & moral audacity. At the core of this story comes primary human hunger, the singularity of an appetite for God & the salvation aspects of a simple meal, epitomized & symbolized not just at the Lord’s Supper but present every time we break bread. Watch what Jesus does: He doesn’t just take less & convert it to more; he doesn’t just satisfy a craving with just enough but returns with far too much, infinite lunch to fill cosmic doggy bags, leftovers forever and ever amen.

This epic dinner party is economic as well as gastronomic. Generous Jesus surpasses our scenarios of surplus & scarcity, of saturation & starvation. This isn’t charity; it’s far beyond measure or logic like infinite sunshine, like the wind, the water, & the air. As much as some of our peers would like to politicize Jesus as a proponent of corporate capitalism on the one hand or state socialism on the other, He won’t fit in those boxes. This isn’t Keynesian economics but the Jesusian gift economy where his supply always exceeds our demands.

As much as we may like, we cannot retroactively impose our practicality on His prodigality. This bounty & excess do not compute. Today, Jesus would probably make an atrocious financial advisor, but in his ledger He always makes divine profits from our deficits. We don’t need Jesus to fix our imperfect system, rather we need to promote & participate in his perfect kingdom. Where every Sunday is potluck Sunday. And they’ll know we are Christians by our lunch.

While it’s clear that this no austerity gospel, let’s not confuse it with the ever-popular prosperity gospel. Here, the Proverbs passage is instructive. While our God provides in excess, the believer needs less. The believer needs just enough & has been known to fast or abstain when appropriate. Today’s Old Testament scripture teaches us that too much comfort breeds complacency breeds a contented contempt. By the same token, too little creates a covetous lack that leads to theft.

The world presents an either/or dichotomy to which our God answers both/and. When the world gives us two choices & says pick one, God shows a third, uncharted way. But whatever God gives, always give thanks. Or as St. Teresa of Avila said: If God gives me partridge, I eat partridge; if God gives me porridge, I eat porridge. When we eat with gratitude, God is the one that we will meet. But it’s not a news flash that in our world not everyone eats. Not everyone gets invited to the feast. Too many in our world still worship greed, and as a collective humanity, we fail to meet every need.

World hunger remains reality. Drought & debt & agribusiness complicate an already devastating situation made worse by the increasing population of an already crowded planet. According to faith-based advocates Bread for the World, “925 million people are hungry. Every day, almost 16,000 children die from hunger-related causes.” “15 percent of people in the United States live in poverty. More than one in five children live in households that struggle to put food on the table.”

In his book of provocative parables called The Orthodox Heretic, postmodern theologian Peter Rollins inverts our miracle story as dark a 21st century dystopia. The disciples and Jesus have a feast for themselves, excluding everyone else. Rollins pens horrible parody:

Jesus and his friends ate like kings in full view of the starving people. But what was
truly amazing, what was miraculous about this meal, was that when they had finished the massive banquet there were not even enough crumbs left to fill a starving person’s hand.

Of course Rollins isn’t really talking about Jesus—but about us. He is not criticizing our missions or tithes, our charity or our service, but our lifestyle of mindless plenty in a world forgetful of its own poverty, and in that, he is more prophet than heretic. Even if we downsize our desires to a proportional global portion, we can still live within God’s good abundance, just not at the expense of the rest of God’s children.

According to renowned food & justice author Francis Moore Lappe: “Hunger is a people-made phenomenon, so the central issue is power.” In the case of global food justice, power that starves rather than saves is sin. We can call it economics, plaster over it with political platitudes, but it’s our collective social sin, plain as day.

Jesus calls us to repent & teaches us another way to be, a new way to love, a better way to eat. Imagine the smells coming from a kitchen when you come home hungry to a healthy meal. Imagine the world healed from the sins of greed & power that make hunger possible. Imagine the satisfaction of growing & preparing food for the people you love. Imagine the taste of heaven.

Small & large real life food miracles occur. Take the urban gardening movement that seeds hope amid the sometimes hopeless despair we see in Detroit. Not far from where I lived while attending Wayne State University in the early 1990s, a flourishing community garden now fills an abandoned lot that was once frequented by the desperate, the addicted, & the lonely. People of God plant gardens to grow food where junkies used to shoot smack & smoke crack because we follow a God who always has our back. We can be the miracle that we wish to see in our neighborhoods & in our world. We are called to bring the bread of heaven in future miracles, feeding the 7 billion, one meal at a time.

If they are to know us by our love, then surely they’ll also know we are Christians by our lunch. May it be so. Amen.

Posted by Teacher Preacher at 7:27 PM