Souls in Pebbles (And the Angels That Shut My Mouth) 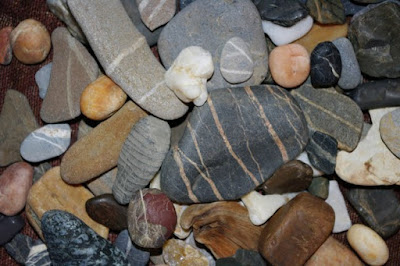 What’s more sacred—the painter or the painting? The poet or the poem? The singer or the song?

What empirical evidence do we have that God exists?

In An Altar in the World and its immediate prequel Leaving Church, with her crisp and compelling narrative voice, Barbara Brown Taylor conveys her earliest encounters with God, manifest and incarnate in the world around her.

Where and how does she meet the Presence with Reverence? In Leaving Church, she’s basking in a feral field, “happy on the black dirt,” so connected to the Creator-in-creation that “I cannot tell whether I am pressing down on the earth or the earth is pressing up on me.”

Her sensuous descriptions delight readers and defy logic. While she claims that she “had no religious language for what happened in that golden-lit field” nor “no picture in my mind of a fantastic-looking old man named God,” it’s obvious to her audience that she was born to a preacher’s poetics of a language that lights up pages and hearts with multiplying images of God, no matter how unconventional these might be.

In An Altar in the World, she’s resting on the deck in the middle of the night with nostrils full of coffee-and- tobacco-Daddy-smells, spellbound by the spangle of sky, studying the stars with a relational awe that strikes the core of us, and like our author, this first impression of infinity makes our stomachs flip.

In these passages, Taylor teaches us about an altar in the world, not an altar in the church. Taylor finds God on earth and in the heavens, not then, but now. She also feels reverent regarding “birth, death, sex, nature, truth, justice, and wisdom” and manages to throw in a line about pornography (in an analogy to define true reverence, mind you) and learning how to shoot and clean guns.

Such exuberant shattering naturalistic earthy immanence shakes me because of how accurately it corresponds to my own experience, but in reading this, I am also confronted with another unraveling revelation. In this entire second chapter, she never references the person of Jesus directly, except in the Eucharist bread and in the tiny reverence for a hazelnut of Julian of Norwich’s vision. God never gets too anthropomorphic. Polymorphic would be more accurate. Is this a pagan priestess or a Christian (former) priest we’re listening to?

So the God that Taylor touches in “night skies, oceans, thunderstorms, deserts, grizzly bears, earthquakes, and rain swollen rivers” is the God of the Bible and not of some New Age-Tree-Hugging-Hippy Occult or of some Pantheist, Buddhist, or Taoist perspective? Is this Bible-based-Jesus-loving Christianity or Yoda-and-The Force or the blue-bodied-3D-magical-mystery-tour of the movie Avatar?

While Taylor does talk about Moses, she’s more interested in the burning bush. The burning bush brings God into focus, breaks our routine, and forces “a time-out.” Taylor’s burning bush is a golden garden. What was yours? Do you remember it? Do you want to write, paint, or sing it out? Is God-in-nature? Or in your heart-and-mind? Does God have a face or facial hair? Is God masculine or feminine? Or both and neither?

Taylor teaches us fleetingly about Christ through the experience of a secular Jew called Simone Weil who became a Christian mystic and who “was drawn so strongly to the sacramental life of the church that her desire for baptism became almost overwhelming to her. Yet she declined to be baptized, saying that she could not seek her soul’s safety in any church that denied salvation to those who did not belong to it.” Rather than feasting at the communion table, Weil “strengthened her resolve to stay hungry with those who were hungry.” Weil’s witness of downward mobility, voluntary poverty, and unchurched Christianity forms a permanent Lent to protest against the social injustice of a world that still has Hitlers.

While Weil’s is a mysticism of fierce absence, Taylor’s exudes a fecund presence where she touches us with what it’s like to touch God in splashes of ecstasy where we get “the whole dose of loveliness at once.” But she also warns about taking more than our share of this legal dose of divine love; borrowing from Weil, she suggests that “eating beauty” (when beauty should only be looked at) is the devouring and devastating desire of “compulsive shoppers, promiscuous lovers, and petty thieves.” And I would add drug addicts and alcoholics to that list—we who cannot be content with mere contact with Spirit, who instead insist on consuming “spirits” without end, liver-damage-and-life-wrecking-blackouts-be-damned.

Taylor’s uncommon mysterious is also most common. She loves chicken but lives in chicken-production country. The fleshy details of feather or fragrance did not compel her to give up chicken but churned her towards “cooking it and eating it with unprecedented reverence.” Reverence sparkles, but it also stinks. It smells like war, addiction, and chicken barns. Reverence comes from both abundance and abstinence, from both Lent and Easter, from bad blisters and boundless bliss, but in every case, it bypasses blame for the God-shaped birthmarks and blemishes of blessing and bloom.

I will never forget the watershed moments in my spiritual journey when my fragile bag of skin got “plugged into” the life force of the universe that we choose to call God. My mountaintop moments are many, so it’s hard for me to imagine what it’s like for my brothers and sisters for whom the universe doesn’t pulse and pound with prescience and Presence.

From revelation to revelation, I did not escape alienation or disorientation. My experience of the electrified and animated world, lush with lust and love and light and life, led me not to church away from it, not to Christ but to a pantheistic and polytheistic neopaganism. I wish I could name a central theme to the magical communities in which I traveled on-and-off for 20 years, but it’s the distracting and disturbing lack of a center that finally led me to distrust my ability to discern between the divine and the demonic, so much so that you could say at some point that I’d “gone over to the dark side.”

Today, I am almost two years into my reconversion to Christ and am so grateful not only to Barbara Brown Taylor but to folks like Marcus Borg, Rob Bell, Richard Rohr, and my pastor Pat Handlson as well—for their works and witnesses have brought me to the vocabulary and vision of panentheism, a way to understand the simultaneous immanence and transcendence of God. Gratefully, nature mystics need not disavow earthy delight; we just need the comprehension of the incomprehensible—that our God is everywhere in the world yet is simultaneously more than the world, always visible and yet still invisible.

When I read Taylor, I am reminded of a few things—that I did not make the trees or my own heart, that I am not God. My reverence for the trees taps into the One who made the trees, so I that I defend but don’t worship the tree, better aligning my theology with our ecology. My sins included “eating beauty” instead of just gazing at it, but they also included confusing my will for God’s. The latter deception is the work of the Deceiver, and I would consider disabusing myself of “self will run riot” nothing short of an exorcism.

Seeing, tasting, touching, smelling, and hearing God in nature and the natural world—sensing the profound cosmic unity of Creator and creation—these sensory spiritualities were not naïve errors of my youth. These experiences attach themselves to the meaning of mystery as Taylor’s book makes abundantly clear. We experience God in everything, and everything or anything can be sacred, because wherever or whenever God goes—from the beginning to the end and to whatever comes before and after or above and below—God’s isness is. God’s that great, that vast, that good.

Rob Bell’s controversial new book Love Wins lavishes readers with beautiful, compelling, moving stories and images. Many resonated with my deepest yearning and understanding, including this one:

“[T]here are Christians who have raised support, gathered supplies, traveled thousands of miles into the farthest reaches of the globe to share the good news of Jesus with the ‘unreached people,’ who upon hearing of Jesus for the ‘first time,’ respond ‘That’s his name? We’ve been talking about him for years…’”

In reverence, Christ is the Christ of bread crumbs and sidewalk cracks, of misty dawns and death’s mystery, the One who, according to Bell, “will always transcend whatever cages and labels are created to contain and name him, especially the one called ‘Christianity.’” Bell reminds us that in the Old Testament Jesus shows up in the form of a rock, and Taylor tells us that mere pebbles have souls. I can imagine many of my younger faithful friends saying, “Jesus rocks,” but it took a famous and allegedly irreverent rock-and-roll preacher to teach me about the rock in Exodus 17 that is The Rock I Corinthians 10. I will never listen to the stones that shout in Luke 19 in the same manner again!

Taylor, I think, understands what Bell’s talking about when she discusses her friends whose reverence rejects religion because they see how it breeds “belief” (a softer word for dogmatic doctrine and imprisoning ideology) that ultimately breeds debate. These everyday mystics “do not want to debate anymore. The longer they stand before the holy of holies, the less adequate their formulations of faith seem to them. Angels reach down and shut their mouths.”

As long-winded and prolific as we American Christian writers and preachers are, I sometimes wonder if it’s only evidence of our lack of deep faith or excess of ideological belief or lack of authentic connection with the living God. Why don’t the angels reach down and shut our mouths (including the big mouths inside our rattling minds)? Is that when the real reverence might begin? I don’t know, but in the meantime, I am going to take Taylor’s advice and practice paying attention to the really big things that can best be seen in the really tiny things.

Posted by Teacher Preacher at 7:07 AM